1 Ipanema and Leblon Beach
Located in the south zone of Rio de Janeiro, Ipanema Beach is considered one of the most famous beaches in Brazil. With paradisiacal sea, many natural beauties and beautiful people, this is where the best hostel in Rio is located, the Ipanema Beach Hostel between stations 10 and 11, one block from the beach.
Leblon beach is a continuation of Ipanema beach and therefore has similar characteristics, with many people playing sports with volleyball and futvolei on the beach. Bohemian region of Rio, offers many bars in the neighborhood. In the corner of the beach is the Leblon Viewpoint, a great place to see the beach from above, with a wide view of Leblon Beach and Ipanema further afield.

2 Parque Lage
Parque Lage is an icon of Rio de Janeiro. At the foot of Morro do Corcovado, Parque Lage enchants with its 52 hectares of pure green, cultural programs and art. In addition, the palace houses the School of Visual Arts and a wonderful breakfast! 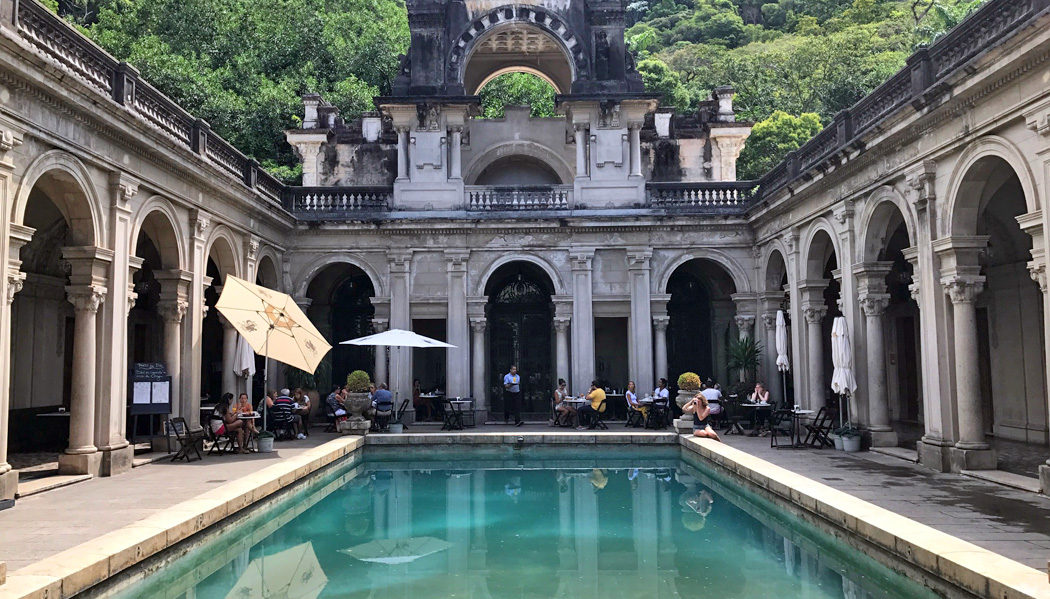 4 Morro dos Dois Irmãos
The trail starts at the top of Morro do Vidigal. To get there, call an uber to the beginning of the hill, take a moto taxi, which costs 5 reais and it will drop you off at the top where the trail starts. It takes approximately 30 to 40 minutes to climb, depending on your pace.
There are 1.5 km of steep stretches and others not so much. The trail is considered relatively easy and, when you reach the summit, you can see the entire South Zone of Rio. 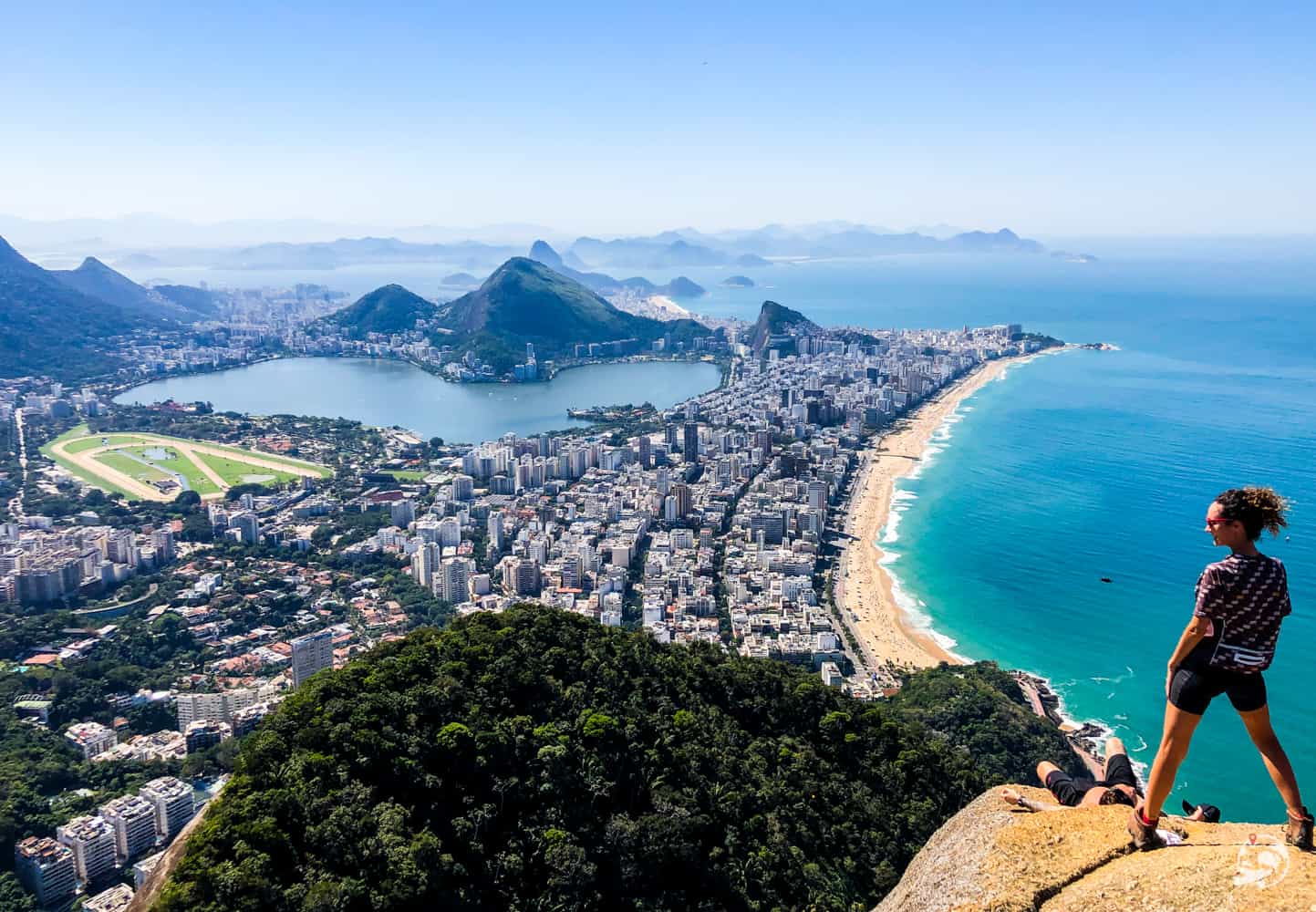 5 Rodrigo de Freitas Lagoon
Lagoa Rodrigo de Freitas or just “Lagoa”, as Cariocas say, is one of the favorite places for those who live in Rio to run, walk, bike, picnic, yoga or simply rest. Perfect for renting bikes, pedal boats or quadricycles. Every year, Lagoa gets a lighted Christmas tree that has already become a tradition in the city.

6 Sugarloaf Mountain
Opened in 1912, the Cable Car to Pão de Açúcar was the first cable car in Brazil and the third in the world, connecting Morro da Urca to Morro do Pão de Açúcar. From the top, you can see the Botafogo cove, the Copacabana waterfront and the entrance to Guanabara Bay. One of the most beautiful postcards in Rio de Janeiro offers stunning views of the entire city. 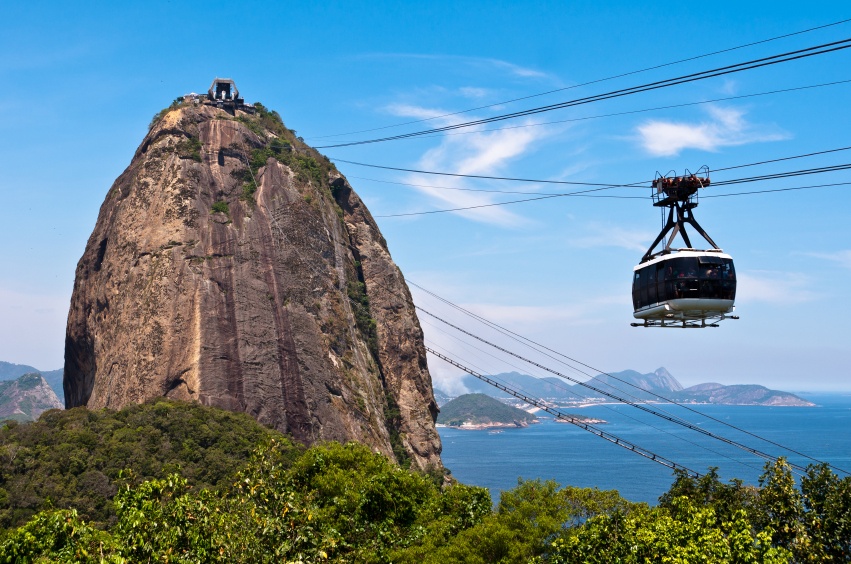 7 Christ the Redeemer
Located at the top of Morro do Corcovado, 709 meters above sea level, in Tijuca National Park, overlooking most of the city of Rio de Janeiro, Brazil. In 2007 he was informally elected as one of the seven wonders of the modern world. Every year, more than 600 thousand people are taken to Christ the Redeemer by the century-old Estrada do Ferro do Corcovado, the oldest tourist tour in the country.

8 Beautiful Stone
Pedra Bonita is next to Pedra da Gávea, another postcard of Rio de Janeiro, but with more difficult access and a walk of around 4 hours. Like Pedra da Gávea, Pedra Bonita is one of the countless leisure areas in Tijuca National Park, considered the largest urban forest in the world replanted by man.
It is in Pedra Bonita that there is the Ramp of Voo Livre, a meeting point for lovers of paragliding and hang gliding in Rio de Janeiro. In fact, it is there that you find instructors if you want to take a free flight, are you brave?

9 Pedra da Gávea
The 842m height of the Stone gives a beautiful view of the entire Rio border, between the South and West Zone, and allows you to observe the mountains of the Tijuca Forest. The most difficult stretch is known as Carrasqueira, a 30m high wall, almost straight, which requires the use of safety equipment. But all the sweat and effort has a reward: without a doubt, one of the most fantastic and breathtaking views of the city of Rio. It gets to be indescribable!

10 Copacabana
Copacabana Beach – Perhaps the most famous and frequented beach in Brazil in the world. Beach located in the south zone of the city of Rio de Janeiro, where there is a great diversity of people from Brazil and from all over the world. On its edge there is a beautiful boardwalk with kiosks. The sand part of the beach is very wide and is a beach lit up at night. The biggest New Year’s Eve event in the city takes place there, where we have the most beautiful fireworks display, perhaps in the world.

So, what place do you consider indispensable to visit in the South Zone of Rio de Janeiro? Tell me!